The Origins of G13 Cannabis Strain

The mysticism of a plant like the G13 only adds to its reputation as a legendary strain. Here, Seedsman takes a closer look at this intriguing strain and how so many urban myths have sprouted from a strain that some don’t even believe ever existed.

Of all the commercially available cannabis strains today, few have accumulated such a legendary reputation and sprouted so many urban myths as the mysterious G13 Afghani Indica. It has even found its way into American cinema, contributing to the already large wall of mysticism surrounding this plant. Where this plant came from and whether or not it actually ever existed has been the subject of countless debates. By following the faint trace that this plant has left behind it, we are drawn to the U.S in the 1970’s, where this legendary plant supposedly originated from.

According to the most reliable story, written by Jesse for the Treat Yourself Magazine, this plant was apparently liberated by an unknown assistant from a government research facility at the University of Mississippi. The G13 was part of a project run by a Dr. Carlton Turner, who was conducting research on both cannabis sativa and cannabis indica drug strains. One thing is known for a fact and that is that Neville Schoenmakers, who also founded the Seed Bank, got a hold of a clone marked G13 some way or the other. Opinions vary but apparently it was given to him by man called Sandy Weinstein, who had a friend working at the government research facility in Mississippi. The G13 was found among a batch of Afghani indicas labeled G1 through G23. The G13 was said to be highly superior to the others, sporting fast indoor flowering, massive resin production, excellent potency and extreme hybrid vigor. 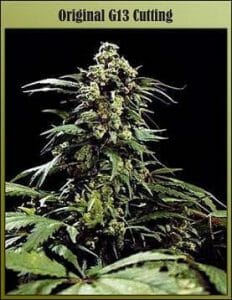 Another story points towards a man named Michael Hallman, who had acquired a lot of cannabis strains during the 1960’s and 1970’s. Following his arrest, these strains ended up in the possession of the CIA and FBI and were later used to genetically engineer the notorious G13 cannabis strain in secret government labs. I leave it up to you to decide which story sound more plausible.

With an alleged THC percentage of over 28 percent, this variety would be rated as one of the most potent strains to date. This can however be disputed. Research conducted at the University of Mississippi as part of the Potency Monitoring Project (PMP) show no records of strains with a potency higher than 9.5%, which is fairly low compared to most commercial strains that can be found today. PharmChem Laboratories Inc. also tested selected strains for potency during this time but never reported THC levels higher than 14 percent. People who smoked the real G13 on the other hand said that it was very potent. These inconsistencies point towards another source than the U.S government, perhaps some private grower. 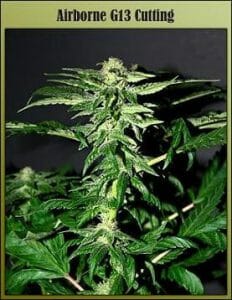 Either way, this plant has accumulated a lot of rumors along the way and today many offer strains that they claim to carry the authentic G13 genes. In reality we have no way to determine whether or not these plants are actually related to the original plant. Regardless of the plants origin, one thing is for sure and that is that there cannot be any pure G13 available in seed form since only a female plant was given to Neville and as far as stories go, it was never selfed into feminized seeds. 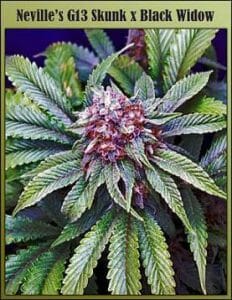 There are however three credited sources where the average grower can get a hold of authentic G13 hybrids; one being Sensi Seeds, which was formed by Neville Schoenmaker under a different name and later taken over by Ben Dronkers. The second is the Mr. Nice Seedbank and finally Soma Seeds.

The lineage of this elusive strain is said to be of pure Afghani origin but there is no way of saying for sure what the genetic make up really was. The plant did show strong cannabis indica traits so it remains the most probable and educated guess. Upon acquiring the G13 clone, the Seed Bank proceeded with creating a whole battery of G13 f1-hybrids. Some of the more notable creations were G13 x Ortega, G13 x Hashplant, G13 x Northern Lights #2, G13 x Haze and G13 x Skunk#1. Only the G13 x Hashplant is still available in seed form today and can be considered the closest relative to the original plant.

The G13 Skunk was said to be the best hybrid and Neville brought it to the attention of Shantibaba at Mr. Nice Seedbank when he left the Seedbank. It was then shelved and forgotten about for some time. After working through alarmingly low germination rates of the 20 year old seed, Shantibaba recently crossed the G13 Skunk that he got from Neville to some old school Skunk#1 and his already famous Black Widow, thereby successfully rejuvenating the old genes. By this time the original G13 mother at Sensi Seeds had already lost so much vigor that the plant eventually passed away, along with her pure genes. The G13 Haze found its way into the hands of Soma, a gift from Ed Rosenthal who had previously acquired it from Neville. He has successfully produced several new strains using the glorious G13 Haze father that was found among a handful of seeds. 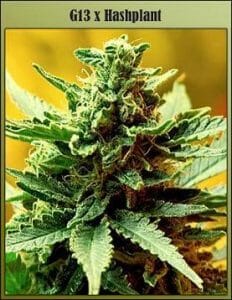 The dream of acquiring some pure G13 is quickly shattered when all the evidence comes into light. The simple answer is that there is none to be found. This legendary plant lives on only through the various hybrids, all of which can be traced back to Neville Shoenmakers and the Seedbank. The closest relatives that can be found in seed form today are the strains that Sensi Seeds and The Mr Nice Seedbank offer. Whether or not this plant truly deserves all the hype is debatable, certainly there are equally potent indicas to be found available but few with such a famous yet mysterious history.