The Origins of Lowryder Cannabis Strain

Created by a man only known as the Joint Doctor, the Lowryder strain may be small but is still extremely powerful. In this article, Seedsman looks deeper into the history of the Lowryder strain and how it came to be a much loved plant for cannabis aficionados around the world.

Lowryder is without a doubt a very interesting and exotic little plant. This auto-flowering cannabis dwarf was originally created by a man known as
The Joint Doctor. The Lowryder and its relatives only grow about 12-15 inches (30-40 cm) tall but can still pack a punch. Lowryders will perform well under any condition but they are particularly suited for growing outdoors at northern latitudes, where the photoperiod during the warmer months of the year is unfavorable for regular cannabis plants. They are also very stealthy plants due to their small size. Most stay lower than the surrounding vegetation, keeping them well out of sight.

The Joint Doctor grew up surrounded by cannabis and quickly developed a healthy relationship with the plant. In his early years he tended to his father’s cannabis garden as part of his daily chores. Later on he started growing his own and found it quite easy to work with the plants. During his years as an outdoor grower he soon became acquainted with Cannabis Ruderalis. It is a short and early flowering subspecies of Cannabis Sativa which has the unusual ability to flower under any light condition. 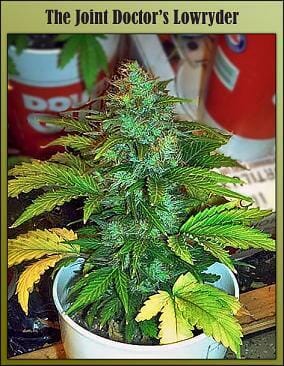 For us to understand the history of the Lowryder plant, we first have to take a look at the cannabis subspecies Ruderalis. Cannabis Ruderalis is described as a near-wild or feral subspecies of cannabis that originates from Cannabis Sativa plants that escaped from outdoor plantations in northern Russia and other parts of Eastern Europe. The days can be very long during the summer in these areas (reaching up to 24 hours of sunlight), so the plant developed the unusual ability to flower under any light condition. Flowering in Cannabis Ruderalis is not triggered by photoperiod as in other cannabis plants but by age alone. These plants will begin flowering under constant light when they are about 3-4 weeks old. Most plants will reach maturity at approximately 9 weeks from sprouting and can yield up to 50 grams per plant, depending on their environment. The auto-flowering trait is recessive in cannabis plants so picking the right plants and isolating the trait through hybridization actually requires a lot of experience and time. 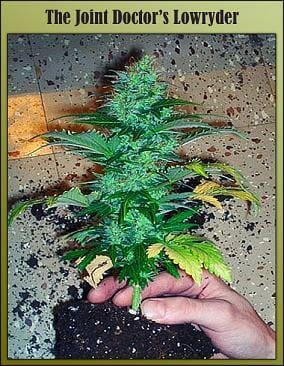 In order to fully appreciate the Lowryder plant, we have to examine its history. The Joint Doctor first experimented with early flowering strains like Mighty Mite but later developed his own early-flowering strain, called 6-way. This plant was never commercialized but it gave birth to the idea of a fully automatic cannabis plant. Some of the components that led up to the first version of the Lowryder plant came into The Joint Doctor’s possession through an acquaintance. They were given to him by a Mexican man called Antonio, who soon became a good friend. Antonio had been collecting and growing unusual cannabis strains for over thirty years and one of the strains that he shared with The Joint Doctor was called Mexican Rudy. The Mexican Rudy was short and flowered earlier and faster than anything that The Joint Doctor had seen before. The lineage of this mysterious plant is a bit unclear since part of the name clearly refers to Cannabis Ruderalis, while the other part suggests Mexican origin. One theory is that the Mexican Rudy was actually an experimental cross of Russian Ruderalis and a Mexican Sativa, made sometime in the 1970’s, possibly at the University of Mississippi in the United States. 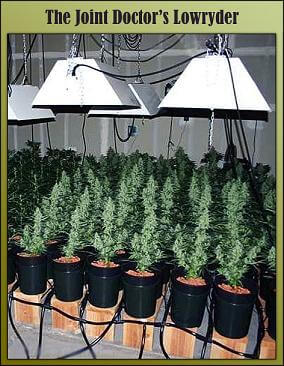 The Joint Doctor realized that the Mexican Rudy had great potential and that it could serve as the back bone for his auto-flowering hybrid but the plant lacked the taste and potency that you would expect from a recreational drug strain. While experimenting with various plants, The Joint Doctor crossed the Mexican Rudy with a Northern Lights #2 female. The results were pleasing, so he further hybridized the male offspring with a William’s Wonder clone. From this second generation of hybrids came a selection of extremely short and fast-flowering plants. They started flowering under constant light so the best ones were selected for further multiplication. All the subsequent generations retained this auto-flowering characteristic. The hybrid, dubbed simply Willy’s Automatic at first, became the basis for the Lowryder strain. Some also speculate that the pedigree of the Lowryder might have taken an alternate route and that it is actually based on a form of early-maturing industrial hemp, called Finola or FIN-314, which was developed by an American scientist for growing outdoors in Finland and other northern countries. Nevertheless, the end results are pleasing and a lot of work went into refining the strain for recreational use while still retaining the auto-flowering properties of the Cannabis Ruderalis ancestor. The Joint Doctor then grew out the variety on a small scale, selecting the best individuals for another five or six generations before it became commercialized. Unfortunately, Antonio passed away before the Lowryder’s success was realized. Still, its notable presence on the market today is nothing but a tribute to his work. Part of him lives on through the legacy of this wonderful little plant that The Joint Doctor and others have since refined into perfection.

The Lowryder plant has been criticized for its lack of potency but the truth is that this is not hemp, far from it. The potency is quite good, if not great, in some of the more highly refined strains regardless of the Ruderalis heritage. It goes without saying that the harvestable bud on these small plants is not astronomical in weight but that is beside the point. These plants are grown for their unusual traits, not the amount of bud that they put out. For some, they are the only choice for a short outdoor season. I think that it is safe to say that the quality of the bud harvested from any plant is partly up to the skill of the grower and these plants are no different in that respect. 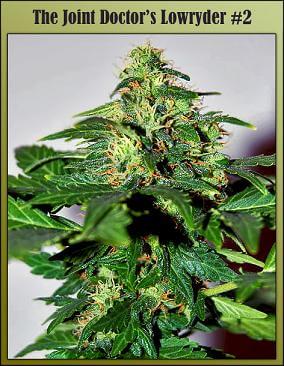 Since the birth of the first Lowryder plant, The Joint Doctor has continued his work on these amazing auto-flowering dwarfs. The more highly refined Lowryder #2 was created by crossing the first version of the plant to a strain called Santa Maria a.k.a. Planck. Santa Maria is a very potent cannabis variety that stems from the Brazilian part of The Amazon rainforest in South America, where it has been used in religious ceremonies for ages. It greatly improved on the characteristics of the first Lowryder plant, adding more flavor and taste whilst boosting potency. More recently, The Joint Doctor crossed his Lowryder #2 to Soma’s New York City Diesel, thereby bringing the Diesel Ryder to the scene. This highly resinous strain normally favors one big main cola and was perfected over the course of some years in order to ensure that the plant takes on the excellent taste and high of the NYC Diesel whilst retaining the auto-flowering trait. This plant is more refined than all the previous versions and can be considered one of the best that he has to offer. The Joint Doctor also provides feminized versions of his plants, including an AK-47 and Lowryder #2 hybrid, called Easy Ryder. 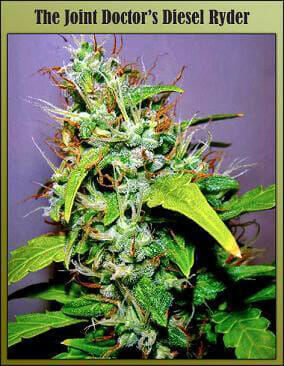 All the plants from The Joint Doctor and Mdanzig are the result of years of expert breeding, meaning that they are all true breeding, auto-flowering hybrids. You will get constant results with their strains.

There are also some interesting Lowryder hybrids offered by Lowlife Seeds, Dinafem, Kannabia, Flash Seeds and several other breeders. Their plants include Lowryder hybrids of AK-47 (a.k.a. Minigun), White Widow, Hindu Kush, Mazar, Blueberry and Skunk #1, just to name a few. Recently it seems like several new seed banks have emerged that specialize in auto-flowering hybrids and they also offer their own creations. There are certainly some real gems to be found among these seeds although the plants might not be as highly refined or sure to auto-flower as the originals created by The Joint Doctor. Coincidentally, many of the new hybrids contain the same strains that The Joint Doctor worked on for a long time in order to create his plants.

There is also a myriad of privately grown auto-flowering hybrids in circulation. Some of these include purple varieties and hybrids made with elite clones. The Joint Doctor recently released a new colorful version of the Lowryder, called Purple Jems. The plant was originally created by a private grower named Mossy, using highly developed Mazar genetics. This plant breeds true for the purple color and provides even more hope for the bright future that awaits the Lowryder family. Purple Lowryder varieties can also be found in the Lowryder Mix from The Joint Doctor as these seeds contain random samples from many different generations of plants. 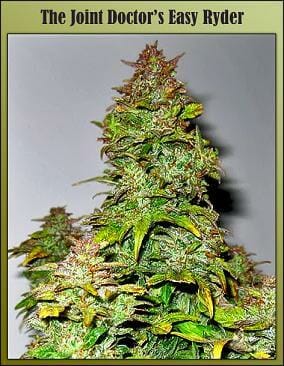 The Lowryder and all its relatives are not only suited for outdoor growers but also for beginners looking for a forgiving indoor plant that can introduce them to the world of cannabis. Although Lowryder plants do not need the usual dark period in order to flower, they will not suffer from it. Lowryders are the fastest flowering cannabis plants around, finishing well before any of the early indica strains. They also stay very low, making them ideal for areas where height is an issue. Lowryders can be grown in soil, in hydroponics or any other way with similar results.