The Origins of the White Widow Cannabis Strain

Probably, the most well known cannabis strain in the world today, White Widow has gained global popularity thanks to countless awards since its release in 1994. Regularly used to make new hybrids, White Widow is extremely potent and is available at almost every seedbank in the world. Learn more about the origins of this famous strain here.

White Widow is without a doubt one of the most successful commercialized cannabis strains on the market today. Perhaps that is also why its history is so problematic. This most famous plant has since its birth in 1994 won a number of awards, including first price in the 1995 High Times Cannabis Cup. Known to be highly resinous and extremely potent, the plant has the ability to humble even the most experienced smoker and has been used in the making of countless new hybrids, always improving on quality.

The name White Widow is usually linked with several different breeders and today almost every seed bank offers its own version of the plant. The battle over who actually invented the strain has turned into a political struggle, dividing the public into two camps. Some believe that the White Widow was discovered by a man named Ingemar, while others take the side of another skillful breeder known as Shantibaba. Although the history of this plant is complicated and shrouded by doubt and misinformed opinions, the truth must be that only one person can be accredited with bringing White Widow into the world. My research has lead me to believe that this person is indeed Shantibaba, the former co-owner of Greenhouse Seeds and current founder of The Mr Nice Seedbank, for reasons that I will explain in this article.

The White Widow strain was first released to the public by Shantibaba, shortly after he founded the Green House Seed Company in 1994 with a Dutch partner named Arjan. The pedigree of this famous sativa/indica hybrid is made up of a pure Brazilian sativa mother and a South Indian, Keralan hybrid father. The exact origins of the mother plant remains somewhat of a mystery but the most educated guess is that it could possibly be the old school, Brazilian landrace Manga Rosa, which has a long history of spiritual use. The Father was discovered during a trip to India where Shantibaba was approached by a man, who after sharing a joint with him, eventually led him to his farm in the mountains of Kerala. The farmer then introduced him to an indica hybrid that had been selectively cultivated and bred towards optimum resin production in his village for a very long time. After several days of sampling the farmer’s plants, Shantibaba left for the Netherlands with a batch of fresh seeds, from which he was soon to discover the male for his White Widow cross. He eventually bred it to the Brazilian Sativa mother, forming the spectacular White Widow. 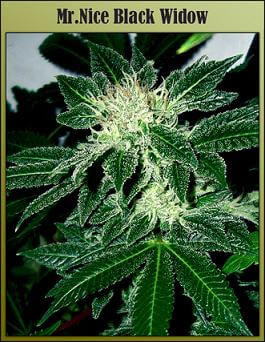 During the time when Shantibaba was still the co-owner of Green House Seeds, he established several new and superior hybrids while working alongside Neville Schoenmaker (the father of Dutch seed banks) on joint projects. Some of the stock that they used dated back to the early days of the Seed Bank that Neville himself had founded, a company that later became reformed under new ownership and known as Sensi Seeds. During the time when the White Widow was created, Shantibaba and Neville concentrated on the breeding aspect of the business while Arjan, not being a breeder himself, was left in charge of promotion and sales. After some conflict of interests between the two owners, Shantibaba sold his half of the Green House Seed Company to Arjan in 1998 and left for Switzerland to form the Mr Nice Seedbank in collaboration with Howard Marks and Neville Schoenmaker. Dispensing with the somewhat theatrical tactics of his former partner turned competitor, the master breeder Shantibaba then concentrated on supplying growers with superior quality strains from both old and new world genetics. The exceptional quality of his products can hardly be disputed by anyone. He started breeding the Widow under the flag of his newly formed brand and gave it the name Black Widowsince the name White Widow was already being marketed by Arjan over at Green House Seeds.

According to an interview for the German cannabis magazine Grow; a breeder named Ingemar is also accredited with inventing the White Widow strain. This is where the history of the plant becomes problematic. Ingemar was apparently working on some strains for the Green House Seed Company in the past, much like he is now, and he quite possibly had a hand in developing the White Widow strain but apparently not in discovering it. He seems to have substantial support from the Dutch growing community but there is little in terms of historical data to support his claim. Ingemar says that the seeds for the White Widow hybrid were accidentally found in a batch of hand rubbed hashish and that the strain was then worked on for some six years before it was released. If this is true, the birth of the Widow can be dated back as early as 1988, although there are no records to confirm this. The earliest descriptions on the White Widow were made by Shantibaba himself in 1995, while he was still working under the Green House flag. The lineage stated for the White Widow is also in accordance with what Shantibaba says. This would indicate that the genetic material that was used to create the White Widow originated from the stock found at the Green House Seed Company at the time, stock that Shantibaba and Neville had obtained and refined. Ingemar has not to this day disclosed any detailed information on the Widow or provided any proof that the plant indeed came from him, besides his own words. The degree of his involvement in the making of this highly regarded strain might never reach the light of day without further investigation. 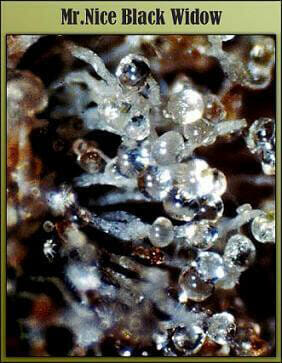 Shantibaba on the other hand has been quite open about the origin of this wonderful plant. He also seems very familiar with both the Widow and its parents. Going by the line of reasoning that I have chosen here, one thing seems to remain undisputable, and that is that Shantibaba is in possession of the only true parents of the White Widow strain now in existence. This would make sense if he also discovered the strain. The parents of his creation are safely tucked away in the MNS clone library. This also indicates that he alone is capable of reproducing the hybrid that was initially released some 15 years ago. In other words, most other Widows must be founded on progeny that originates further down the line and they are also most likely out crossed with something else. Further evidence to support this theory comes from the plant itself. The plant from The Mr Nice Seedbank seems to have the most in common with the White Widow that the Green House Seeds Company entered into the Cannabis Cup in 1995. Ingemar offers his own version of the White Widow and several White Widow hybrids, like the notoriously potent Ingemar’s Punch, through the DeSjamaan seed bank and the White Widow Web. He is also working closely with Arjan over at Green House Seeds, supplying him with genetic material which include the allegedly one and only true White Widow strain. As wonderfully potent as it might be, the authenticity and genetic makeup of this parallel version of the Widow will remain a mystery until we are enlightened by Ingemar himself. His substantial contribution to the varieties offered by the Green House Seed Company should, however, not go unnoticed.

Shantibaba discovered many of his strains while working under the Green House label but apparently never shared the parental stock of his strains with anyone. Nevertheless, the Green House Seed Company still offers many of his and Neville’s strains, claiming that they are the real deal. Most notable of these strains are the White Widow (Black Widow), White Rhino (Medicine Man), Great White Shark (Shark Shock), El Nino (La Niña), Neville’s Haze and Super Silver Haze. Not without a sense of irony, many of these plants have accumulated an impressive amount of awards for the Green House Seed Company over the years. The fact however remains that all these plants can be traced back to the original breeders Shantibaba and Neville, who in an attempt to avoid confusion, renamed some of their strains. Sadly, despite their efforts, confusion and contradiction ensued and even more breeders emerged, claiming to have invented the White Widow strain. The Green House Seeds Company has not been as active in developing new, and reinforcing old strains, as Shantibaba. Their focus seems to have shifted towards feminizing their old stock. 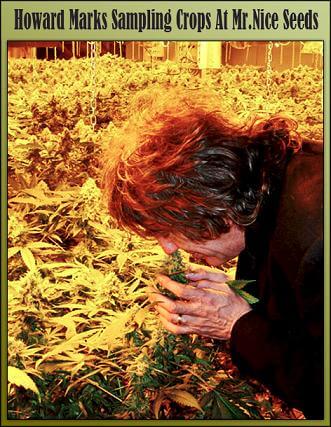 Today almost every breeder and seed bank sell seeds that they claim to be the original White Widow. In 1996, both the Nirvana and Dutch Passion seed companies purchased a single pack of White Widow seeds from Shantibaba himself at the Green House Seed Company and within a year released their own versions of the Widow. Undoubtedly all very potent and nice plants, the question whether or not all the White Widow plants on the market today can actually be considered pure remains highly speculative since the only true parental stock remain in the sole care of Shantibaba and the Mr Nice Seedbank. Why so many different breeders claim to have personally invented this strain is puzzling although understandable due to its commercial success. New breeders keep emerging, claiming authority over the White Widow strain. There can, however, be only one truth, however hazy it has become over the years.